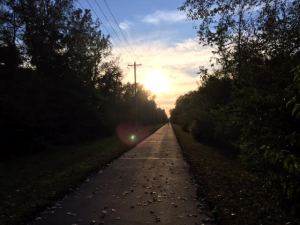 When I was six, my family moved into a big white house on the edge of town, a mile north of the Wabash River. I was the younger of two boys, and we were lucky enough to have parents who settled into the neighborhood and became permanent fixtures there. Mom and dad are in their seventies now, still in the same house, still going strong but for some minor ailments.

I liked the house, liked my room, liked our yard and the neighborhood, but what I loved was the twenty acres of woods behind the house. There was a failed development between the back edge of our back yard and the beginning of the woods, only one house was built; when I was growing up, it was just a huge square grassy field. We played baseball and football in that field when the grass was short,until they stopped mowing it and it returned to nature.  Then when the grass got tall we bunched stalks of it and tied the tops together creating big grassy tunnels full of daddy long legs spiders.  Finally, saplings took root and begin to growing into a young forest itself, but that took years – the years after I grew up.  To me, that was always “the field” and what lay beyond was “the woods.”

The woods called my name.

I entered reverently, passing under the coolness of the canopy and into another world. It was a world I’d inhabit for the next twelve years. When I was six, those twenty acres seemed like their own country, and each year on the last day of school, I’d be gone. Riding my Murray Stingray up and down the hills, swimming in the creek, eating apples from wild apple trees, and setting up camp sites that would host overnights for a decade – too many memories to remember them all clearly because they all run together.

Until the day I went to college, I wanted nothing more than to be a Boy Scout, and I yearned for the day I’d turn ten and a half so I could ink that triplicate member application. To this day I can still remember the smell of at form because I held it up to my face and breathed in its official, business like smell like a bookworm might bury his face in a book. Nature was my book, my constant friend, my retreat. In the middle of that woods, there is a massive glacial pudding stone at the top of a small hill that leads down to the creek. To this day, it is my touch stone, and I’ve felt drawn to go and sit there and think before some of the most important decisions of my life.

I don’t even know who owns the property anymore, but it will remain forever mine in my memory.

Turning twenty, courting my wife, getting married, starting a family – all of these things took a toll on my outdoorsiness. There is a thirty year gap in my life that has been filled with good and bad things, but was almost completely devoid of just being outside in the wilderness I loved.

I turned fifty this past August, and I swear, the next thirty years will make up for the past thirty with a vengeance.