2018 was a great year for a lot of reasons. I’m progressing in my career and I’ve never been in a better place in my life, I finally found myself in a job that I love waking up and going to every day that also happens to include the opportunity to travel for work periodically. This January marks 3 years since I got out of the cloud of VA prescribed medication that almost destroyed my life. My relationship with my wife and my family is better than ever and I have a genuine love of life that has been growing stronger and stronger since I started using the outdoors, and specifically hiking and backpacking as a way to safely ween myself off of the pharmaceutical industry’s teat.

With all that being said, 2018 was not a great year for me in regards to trail miles. I had a job transition in April that took our family from South Texas to Nashville, and even living in Tennessee (a backpackers mecca), I barely managed to fit in a handful of trips over the second part of the year while trying to balance my new responsibilities with the work travel opportunities that were presented to me. I frequently bat back and forth between the drive to be hyper ambitious, fueled by some recent success, and the desire to give everything up and make travel and backpacking my full time focus. Obviously it isn’t practical to leave a career that pays well and is genuinely fun and challenging. But it’s difficult to shake the urge to just take off and leave all the stress of modern life behind. No more deadlines, projects, office hours or typical responsibility to worry about. The idea of spending the days and weeks focusing on the beauty and simplicity of what’s immediately around you is a siren call to some of us. Living in middle Tennessee the drive to Springer Mountain, Georgia and the southern terminus of the Appalachian Trail is quick enough to be an extended day trip.

But for now I’m staying practical and taking advantage of the travel opportunities that my career presents. Most recently I had the incredible, and incredibly poor timed opportunity to visit Buffalo, New York in January. We lucked out for the most part and got to stay for a week that was relatively warm for the northeast and we avoided any major snow storms (by a matter of hours on the return flight). This trip felt like the perfect cap to a 2018, when we’d taken a few trips around eastern and middle Tennessee chasing the many waterfalls that snake through the local topography. It was a frigid day in the middle teens when we made our way to the American side of the falls, at dusk so that we could see them in the daylight and at night. We got some cool pictures and an amazing video of the falls, but Niagara is a wonder that is only done justice in person.

The Paw Paw Trail is a 3 mile moderately trafficked loop trail at Fall Creek Falls State Park near Pikeville, TN that features an incredible waterfall view and a scenic overlook that is breathtaking in its own respect. This is a great day hike, but access to the falls is via a very strenuous cable trail that is a mix between hand over fist rock climbing and rappelling (not really that intense but it seems like it) in some areas.

However, if you’re looking for a great weekend trip that can be completed in an afternoon, this is the trail for you.

As always, I’ve added some of my favorite pictures from the trip (and a couple videos) below. 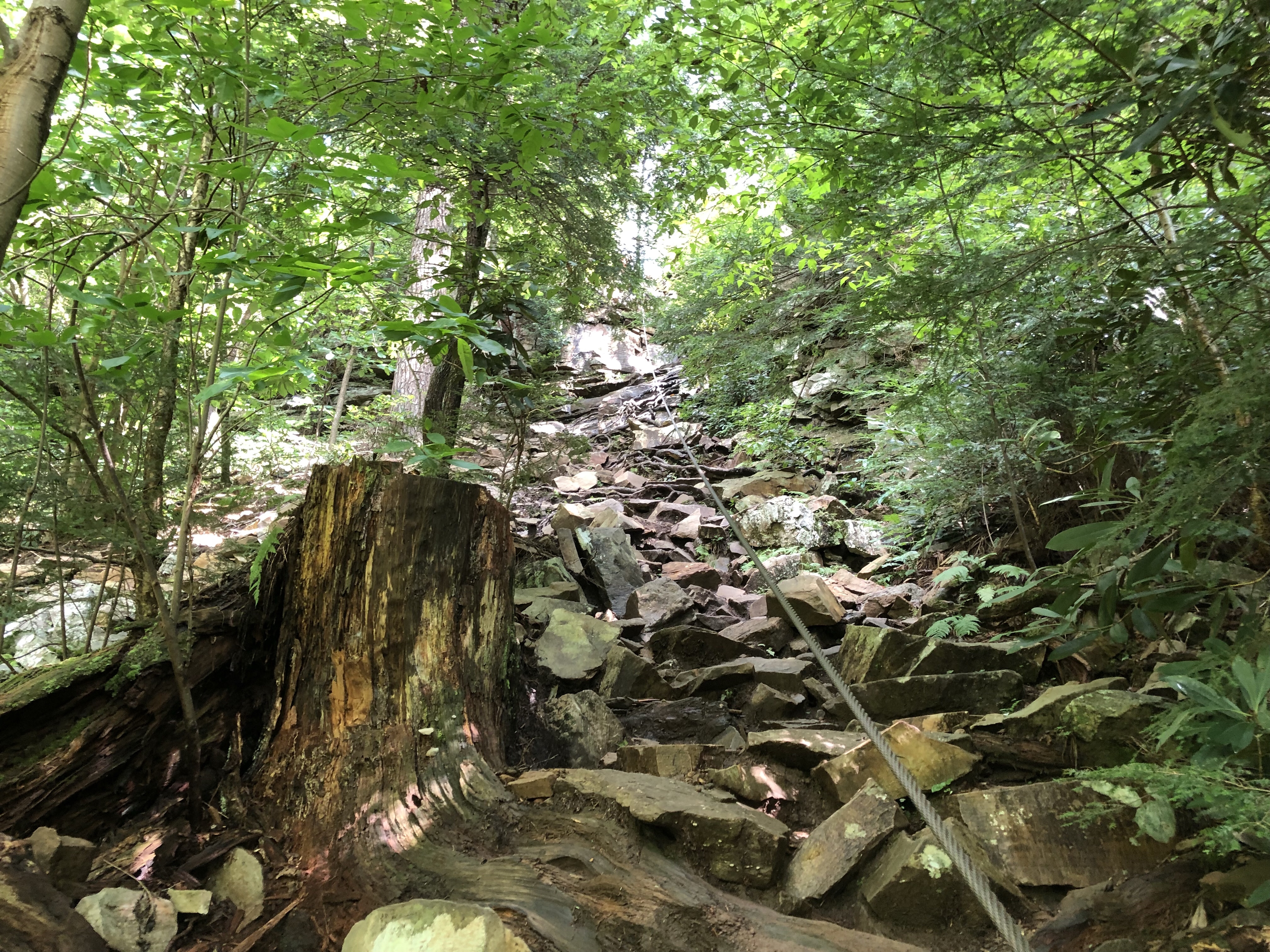 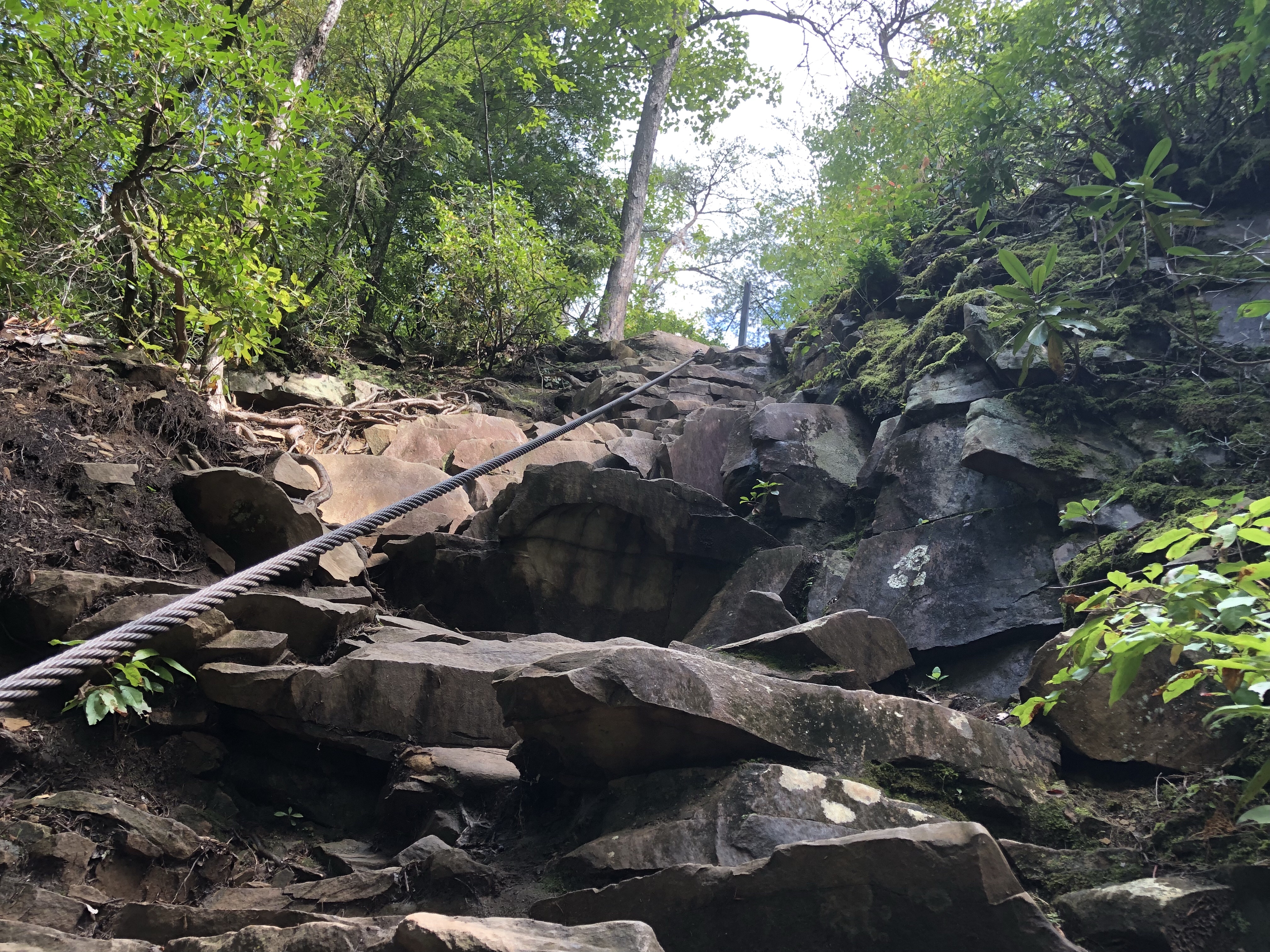 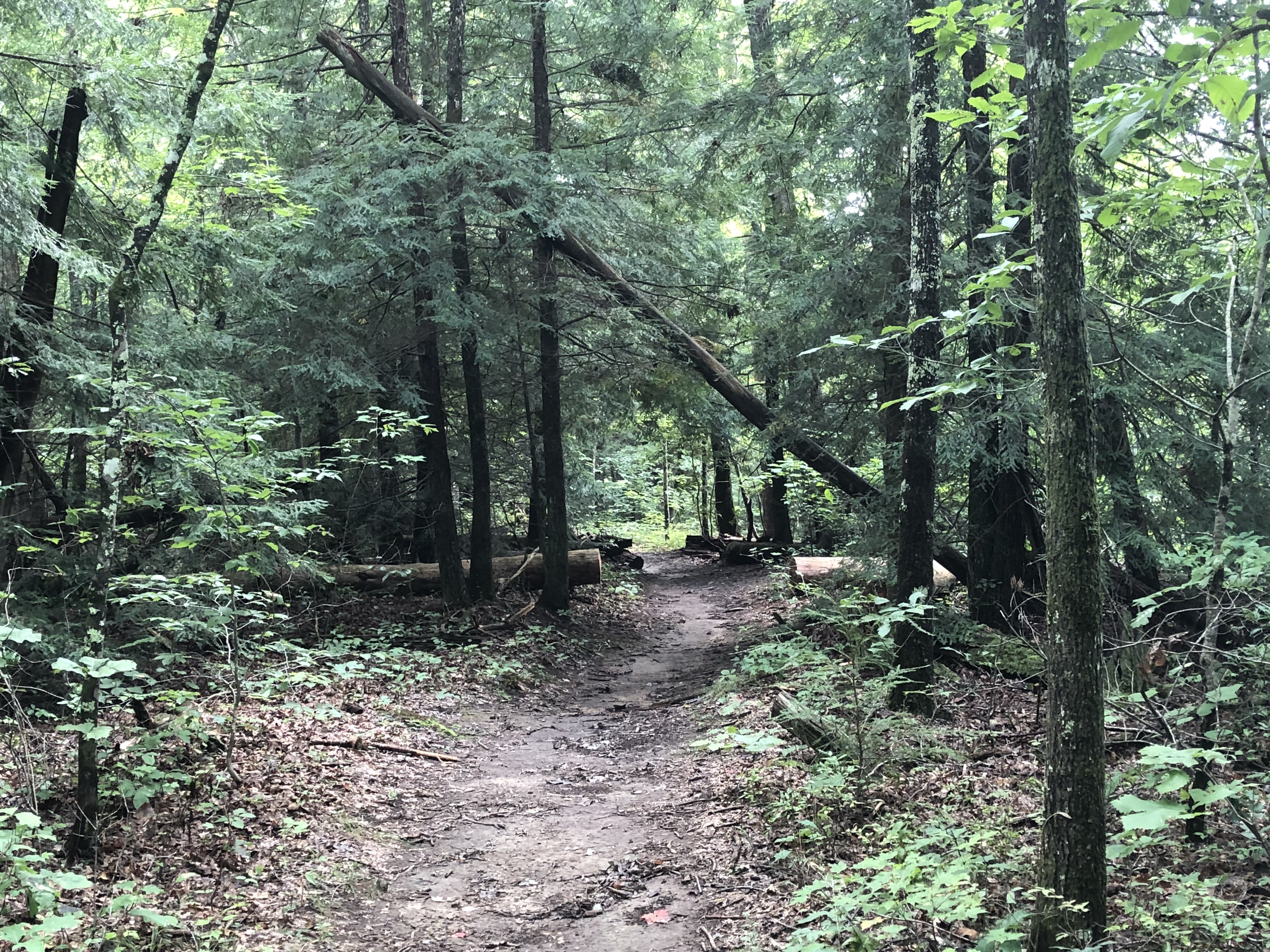 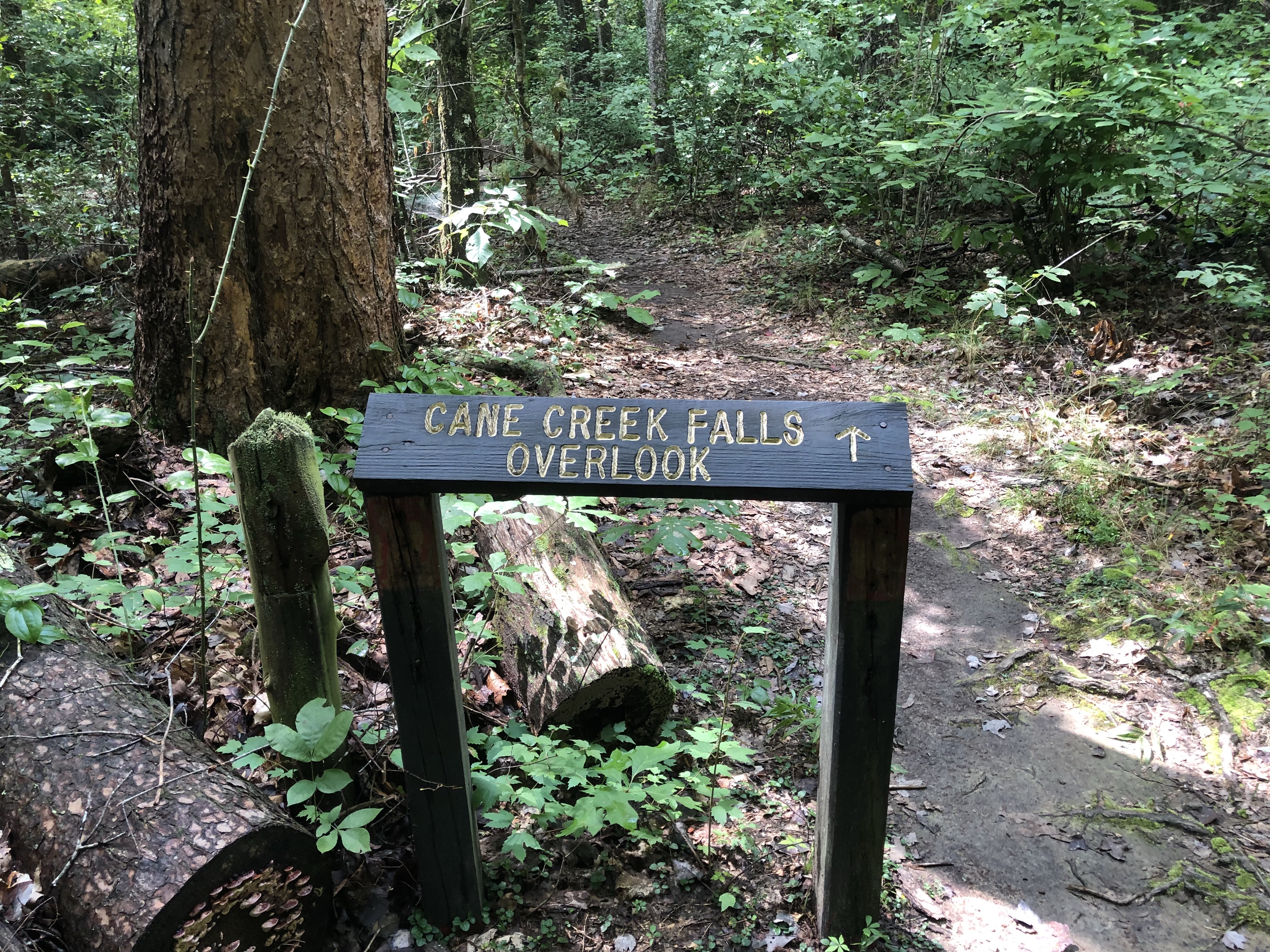 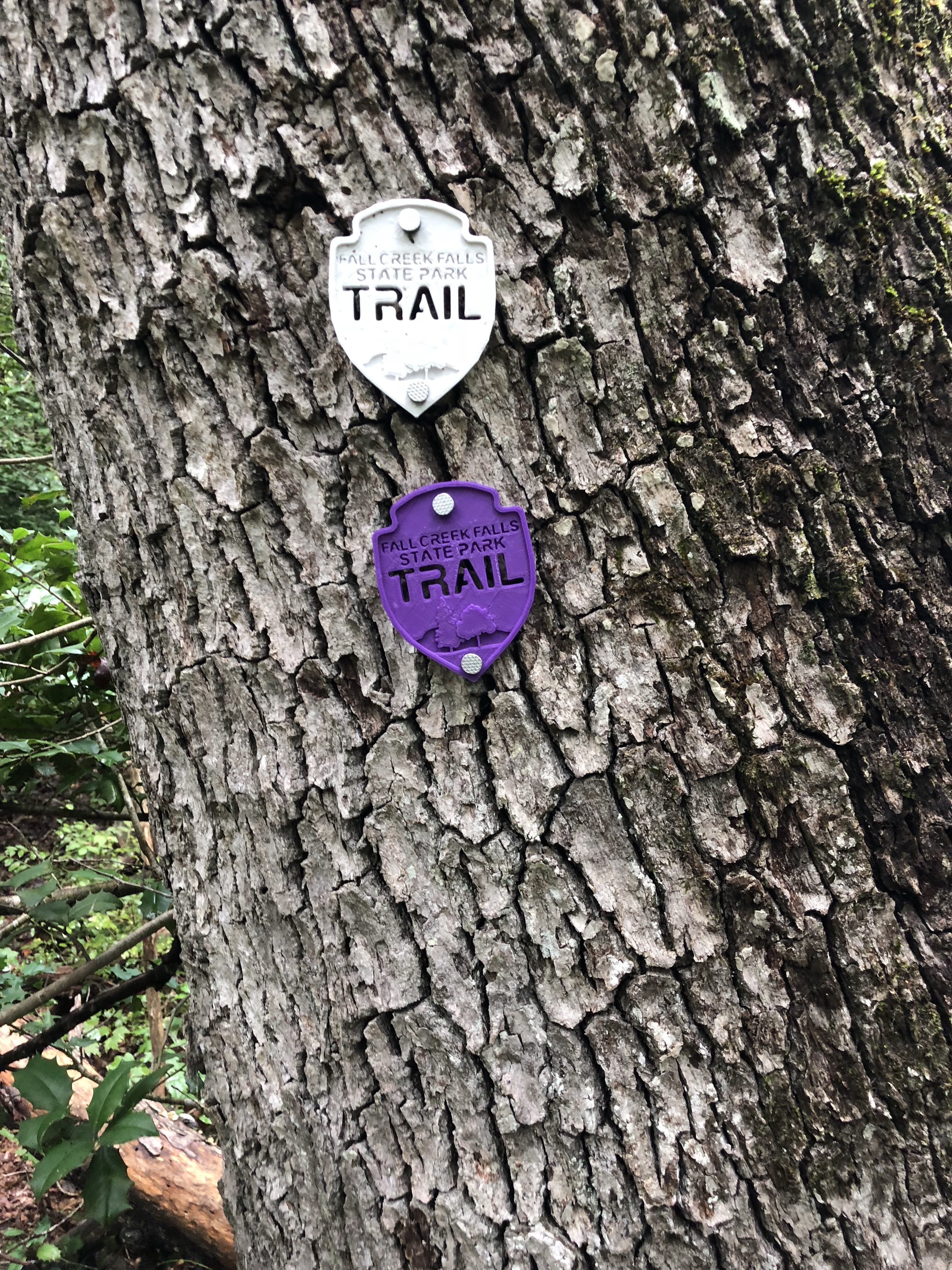 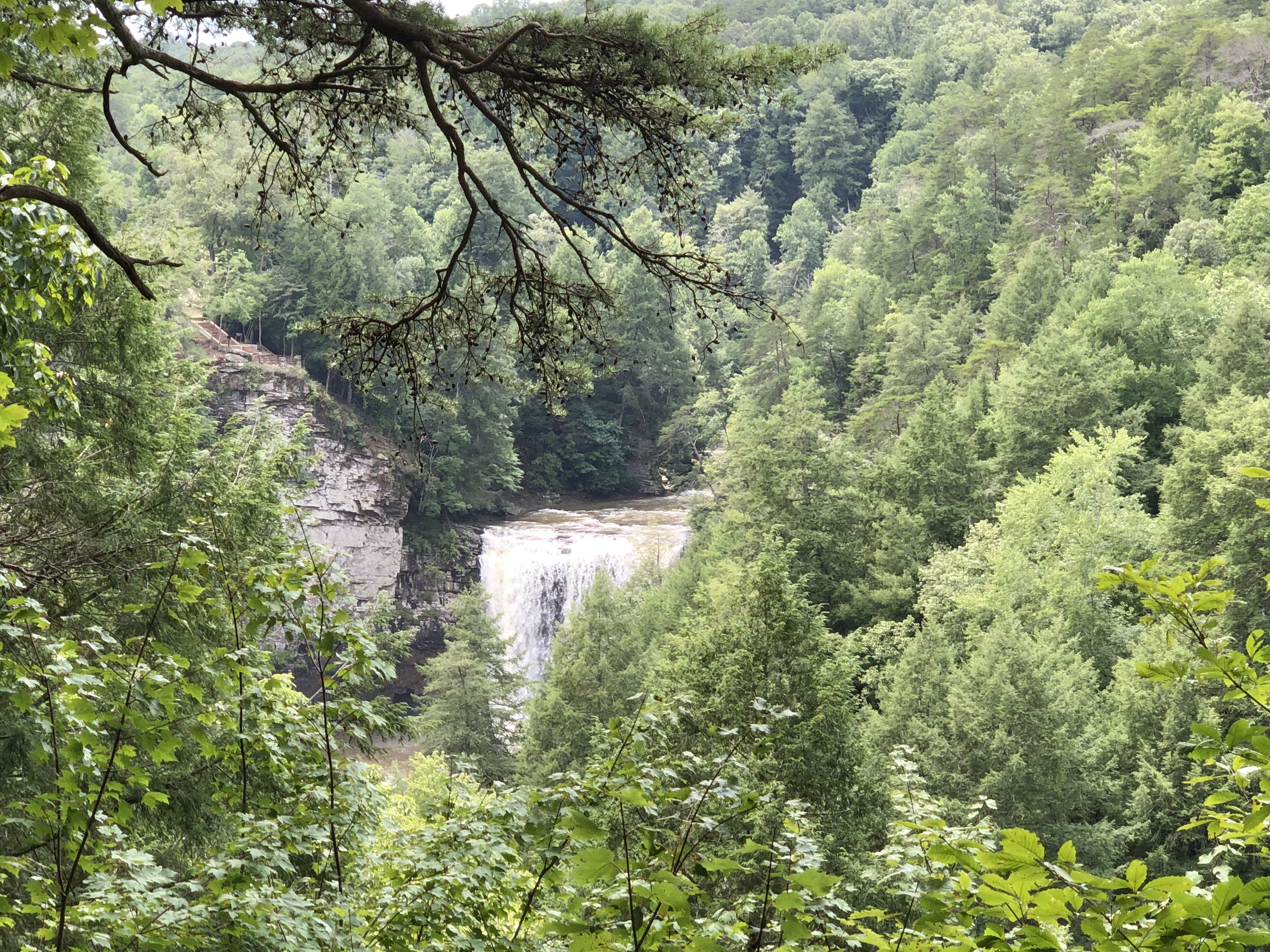 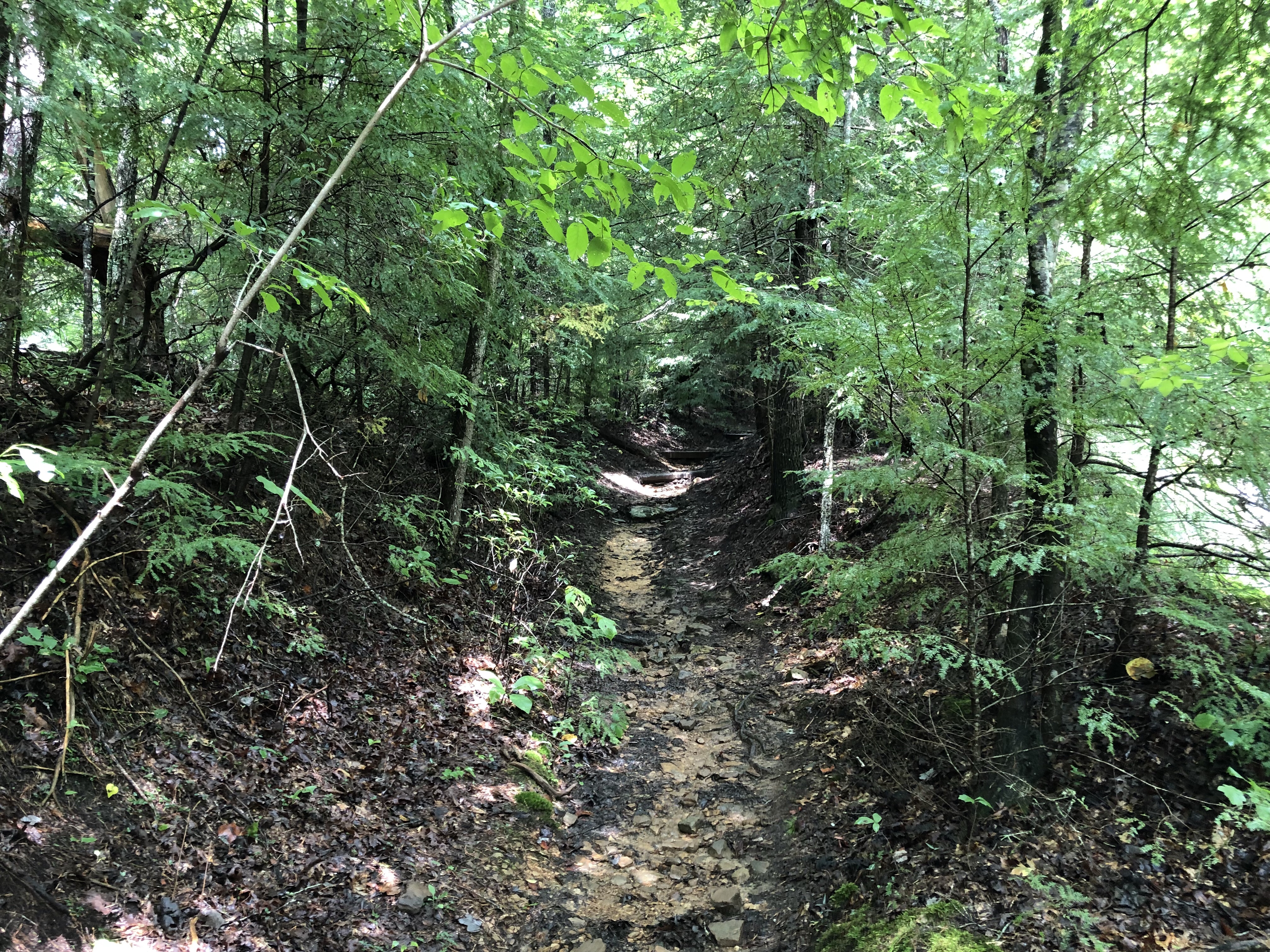 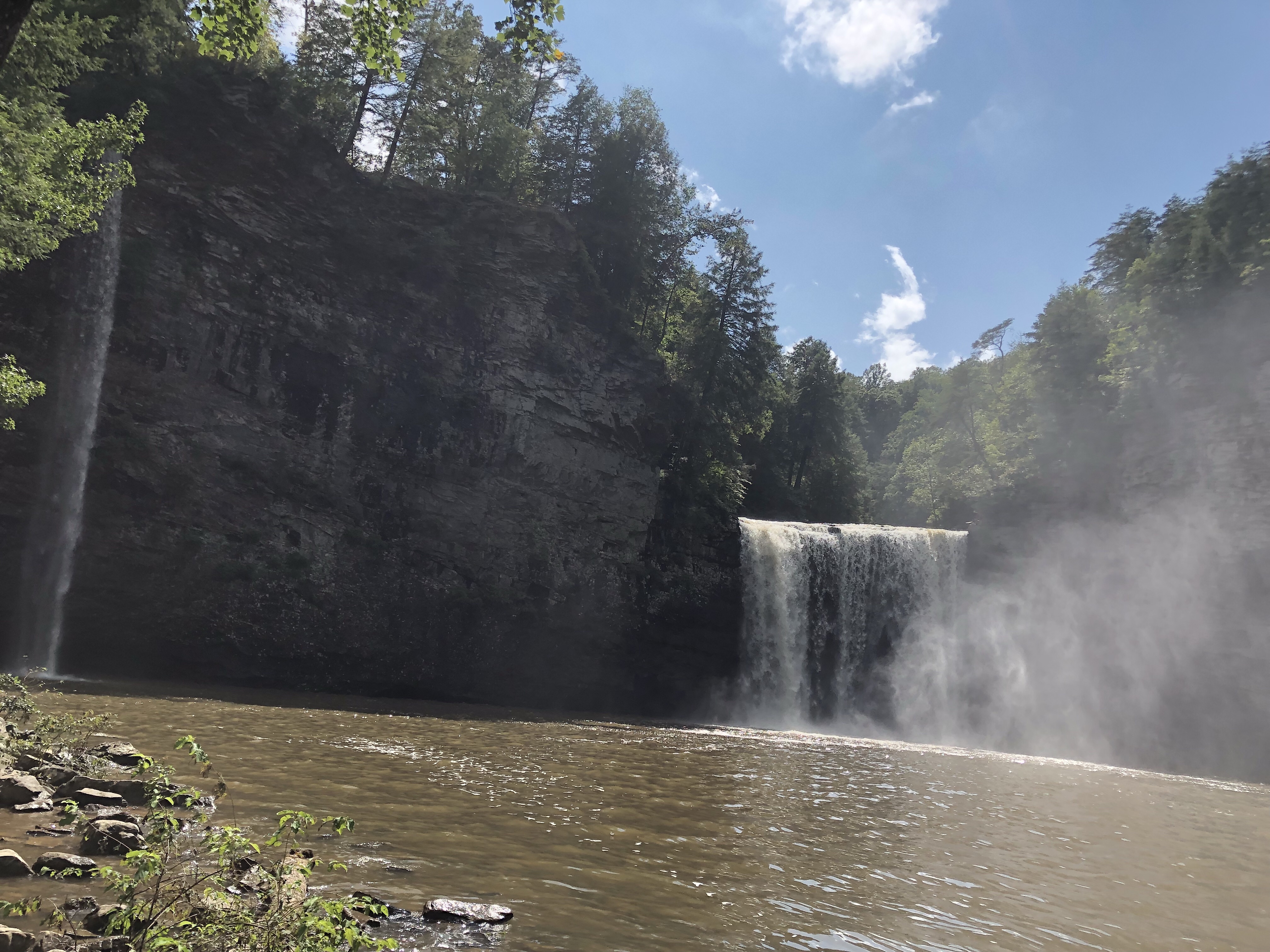 The Savage Gulf Day loop is a moderately trafficked loop trail located in the Savage Gulf Natural Area near Palmer, Tennessee. It offers a scenic overlook and 3 to 4 waterfall views depending on how adventurous you want to be. The track that we took was about 5.5 miles when all was said and done, but this trail begs for off the main trail excursions. The trail was well maintained and mostly flat, so even in the August heat starting in the middle of the day it was still tolerable and well worth it for the views. There is a scenic waterfall overlook to the east of the access to the falls, but during the summer it’s so overgrown that it’s really not worth the quarter mile side trail to get to the overlook.

This trail also offers 8 primitive camping locations within walking distance of the falls, but they are first come first serve and must be paid for in advance. All in all this is a very cool day trip that is accessible for anyone that doesn’t have a difficult time walking up small hills and over flat ground. I highly recommend this trail to anyone looking for a little weekend adventure in Southeastern Tennessee.

Directions and further information are available in the link below.  https://www.alltrails.com/trail/us/tennessee/savage-day-loop 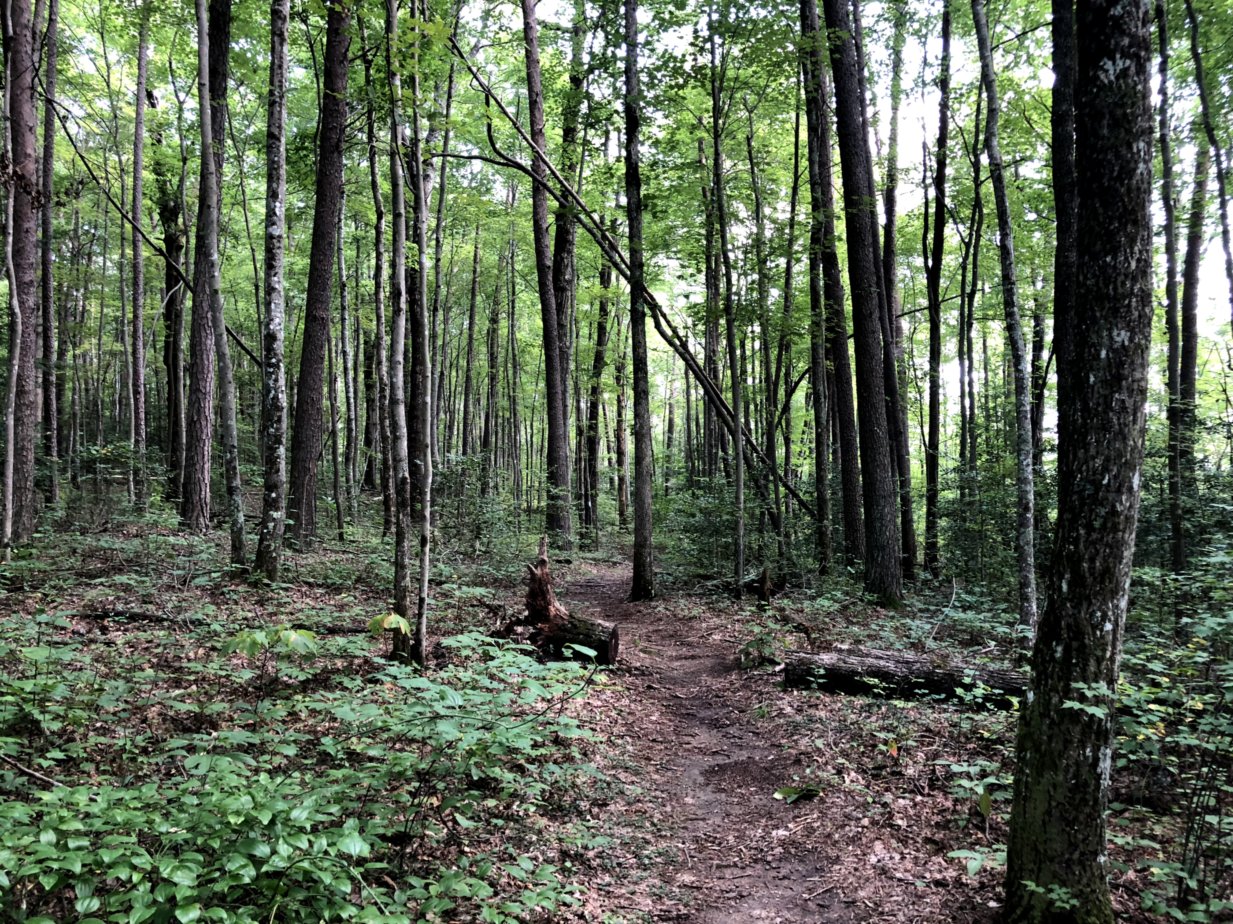 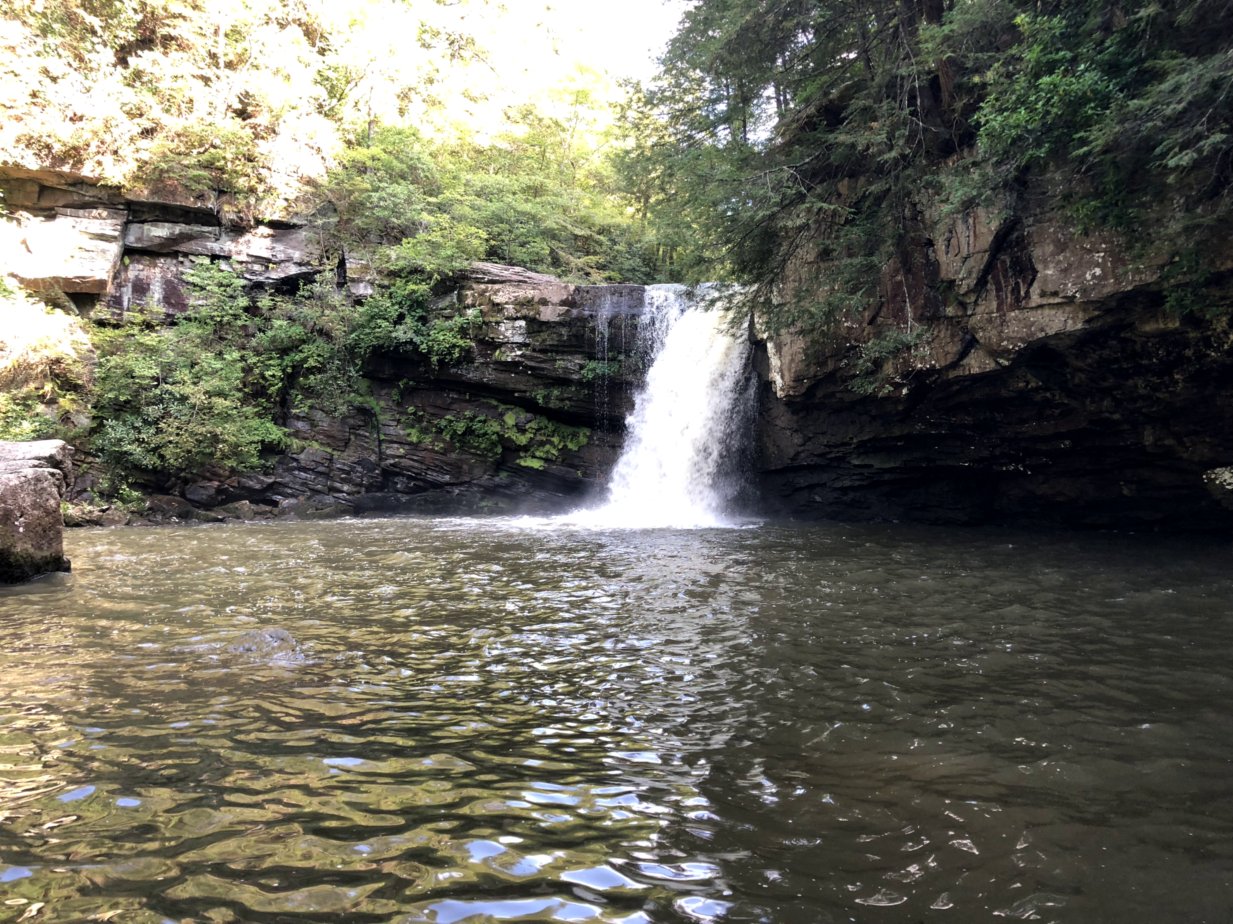 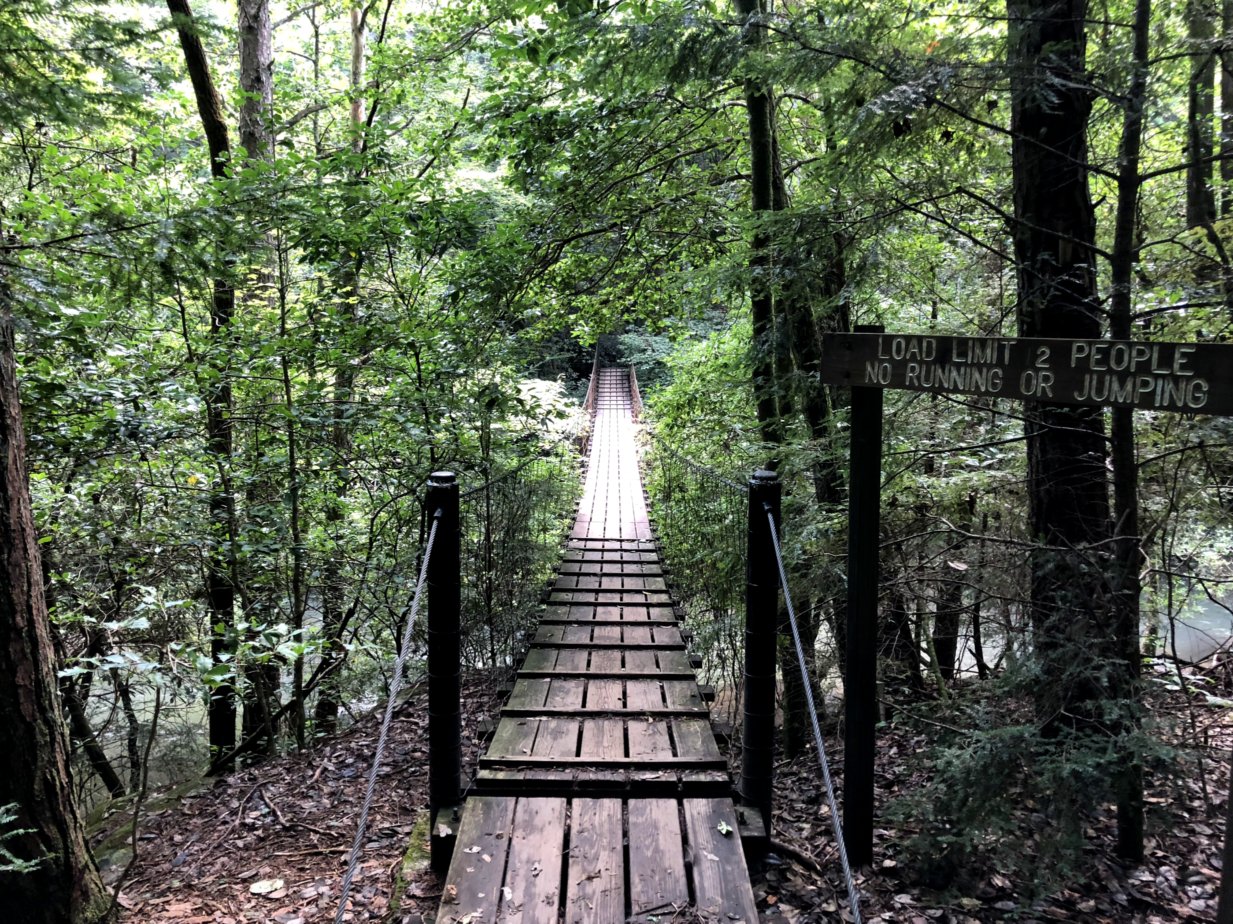 Back before the promotion and move to Texas we hit the creek bed trail at Clifty Falls in Indiana.

This trail literally follows the creek bed from the terminus all the way to the waterfall.

The waterfall is technically off limits because of the risk of falling debris from above. But we’re not the type of people that find a waterfall and don’t have a little fun. 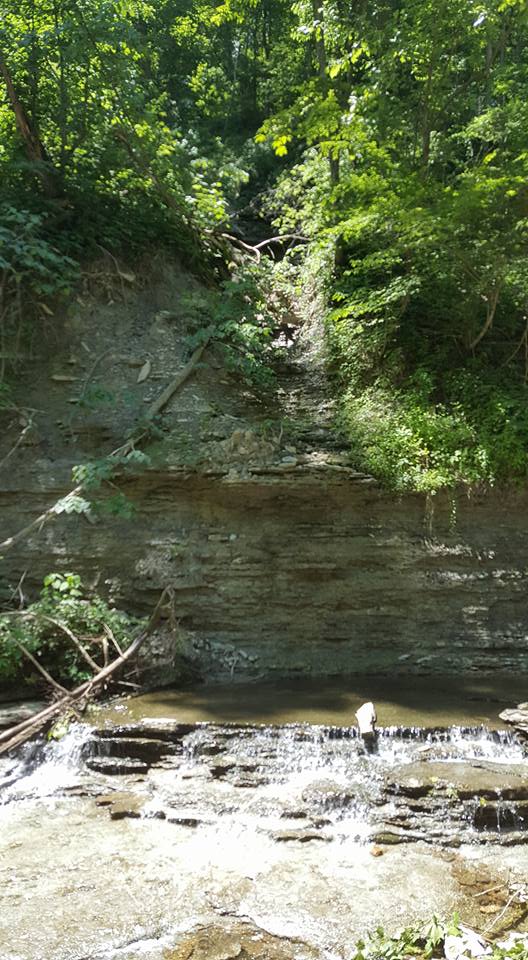 Aside from the AT, this was the coolest hike I went on in 2016 and I hope to make several more trips in the future.

Directions and further information are available in the link below.  https://www.alltrails.com/explore/parks/us/indiana/clifty-falls-state-park?ar%5B%5D=10164113

A little over a month ago my Army buddy Jarred hit me up on Facebook and told us we should come check out the Starved Rock trails about an hour away from where he lives in Illinois. I was going to make the trip regardless of what the trail was like because it’s not every day that you get to see one of your Army brothers once you stop wearing the uniform. But after a quick google search of Starved Rock and some dramatic waterfall pictures this quickly became one of my most anticipated hikes so far. So after taking a day off of work on Saturday, we loaded up the truck and were on the road by 8am. From my front door to his is about a 3 and a half hour drive. But going from central Indiana to Illinois you make up an hour, so we made it right before noon after awkwardly blowing through several toll areas because we’d forgotten to bring cash for the toll road (they just take your license plate # and you pay online).

After quickly introducing my father to Jarred and his (then) girlfriend Cassie, we loaded into the truck again and drove about another hour to Starved Rock. The parking lot was filled almost to capacity when we arrived, since it was 60 degrees in mid-late February and it had snowed heavily the prior week, everyone was taking advantage of the short respite from the winter weather.  So we all piled out of the truck, my father and I strapped our daypacks on and we took off for the trail.

The first part of the trails here are all built up, wooden walkways, concrete paths. All lined with college kids taking selfies in “nature” and complaining about getting their shoes that are “meant for breathing” dirty in the mud. We admired the views that we could and quickly scrambled further into the trail. After a short walk with a good many stairs and a lot of tourists we came to our first set of incredible views overlooking the levee right off the state park. We played tourists here ourselves and took lots of pictures and heard the backstory of the Starved Rock before moving on to the next area. The whole Lovers Leap, Eagle Cliff and beehive overlook area was like a spider web of wooden paths sneaking through the trees and over the cliffs to pop out for scenic view after scenic view. It was quickly apparent why this state park was so popular. 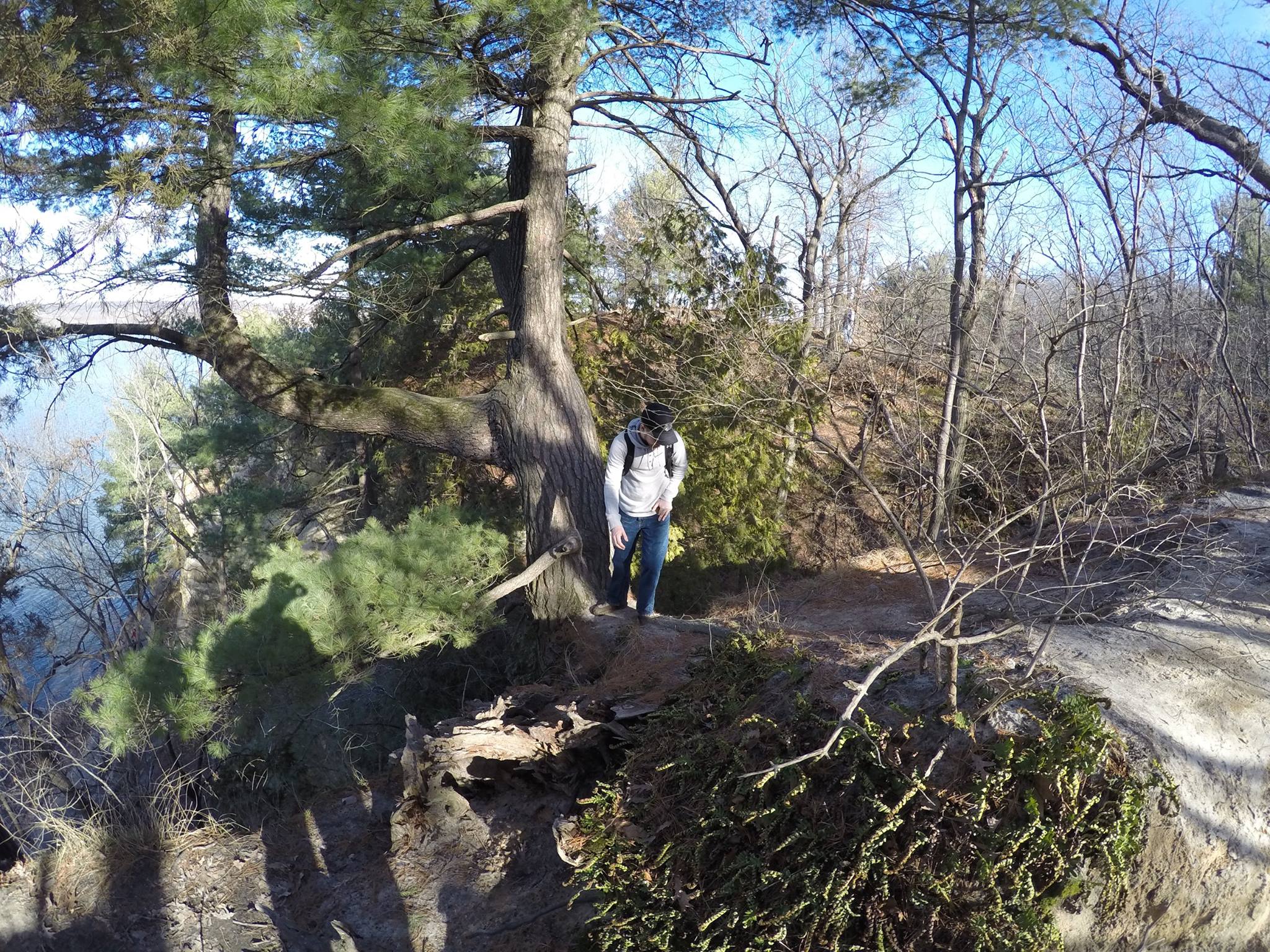 So after the overlooks, we moved on to the canyon areas. While we didn’t hit all of them while we were out we did hit most of the more popular views and got some amazing shots of Wildcat Canyon, Lonetree Canyon and Basswood Canyon. These were the homes to some of the most dramatic and awesome pictures and views that we saw through the entire trip and were definitely my favorite part of the hike. Even my protesting legs were okay with the 50 or so flights of steps that we’d gone up and down to see these views. Although at this point I was starting to question my decision to wear the daypack that’s still loaded down with everything I’d need to start hiking the AT today. But I remembered that sometime in the next 4-5 years I’ll be standing at AT approach trail in Georgia and likely wishing I’d hit hillier trails with that pack on BEFORE starting the thru hike.

Anyway, after the Canyons we started Cassie’s (Jarred’s Girlfriend) least favorite part of the trail. The roughly 2 mile portion of bog style mud from all the meltwater and foot traffic on the trail that day. While we covered our boots and shoes with mud we saw a few stray shoes stuck in the mud that reminded us why we tie double knots before we go into stuff like that. This whole portion of the trail took us about an hour each way, even though it was muddy and tedious it was mostly flat and there were no more hellish stairs to clamber up. We made our way to Own Canyon Overlook and LaSalle Canyon and explored off trail for a little while before deciding to turn back, as we noticed that we would soon be running short on daylight. 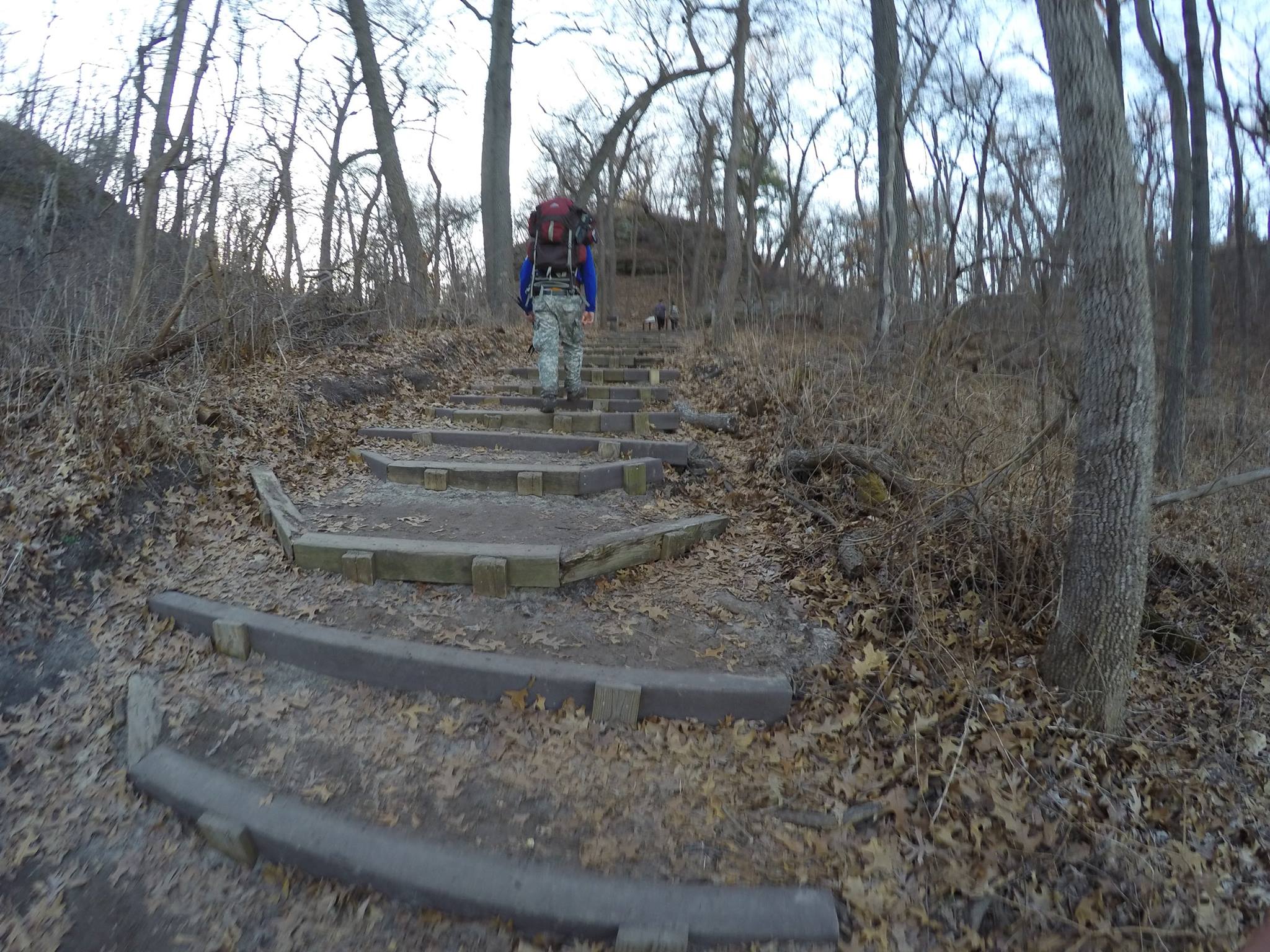 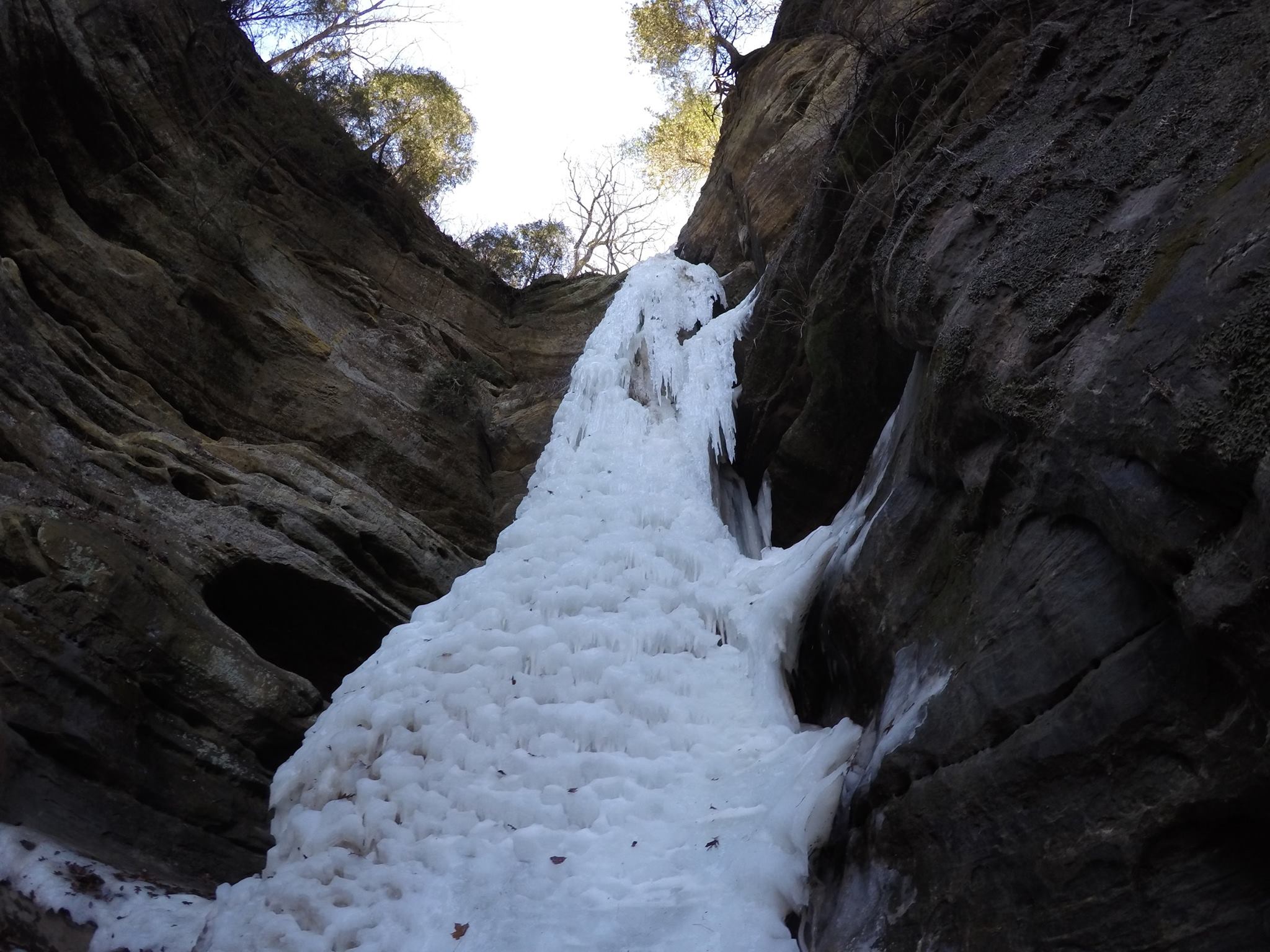 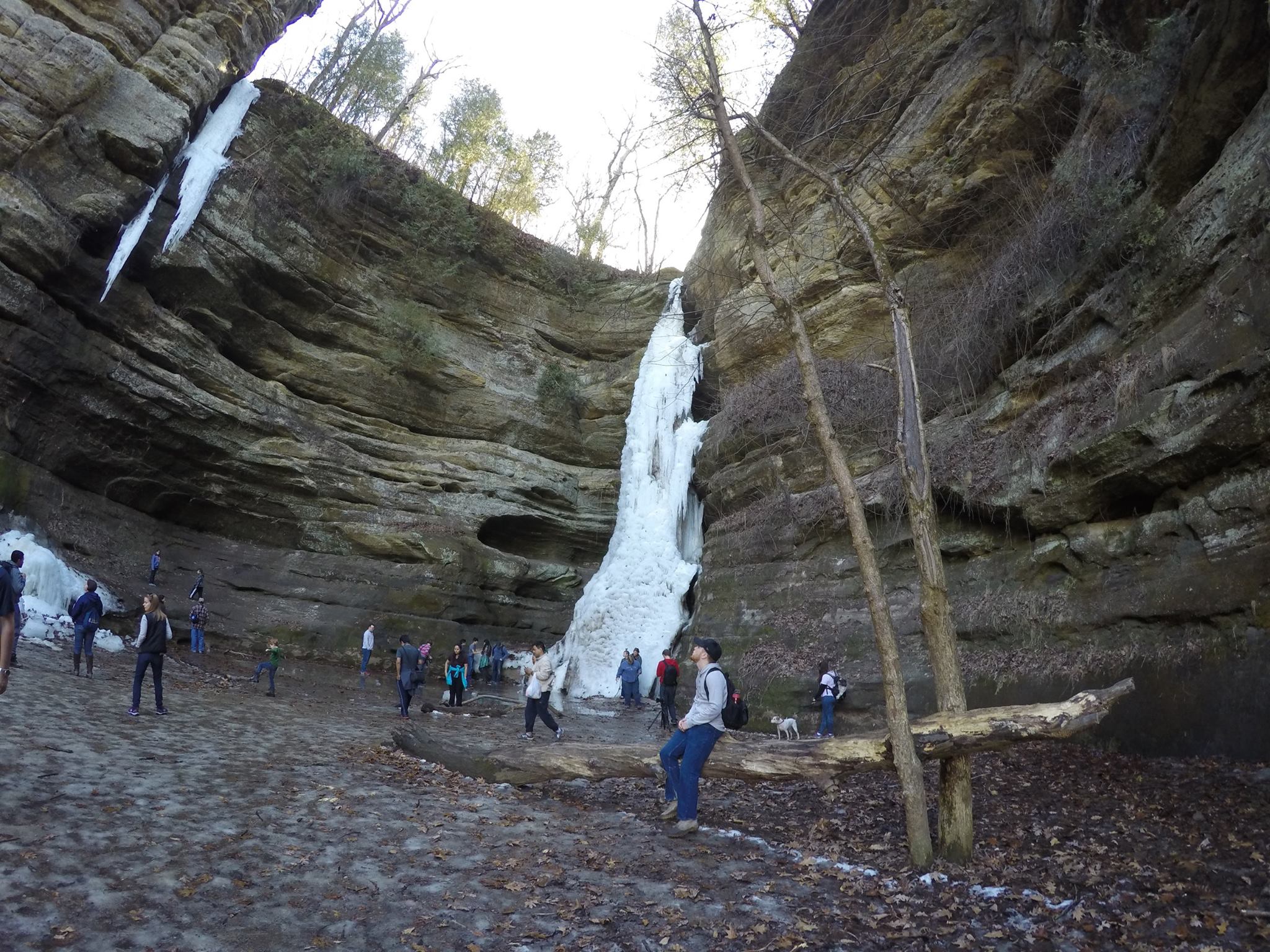 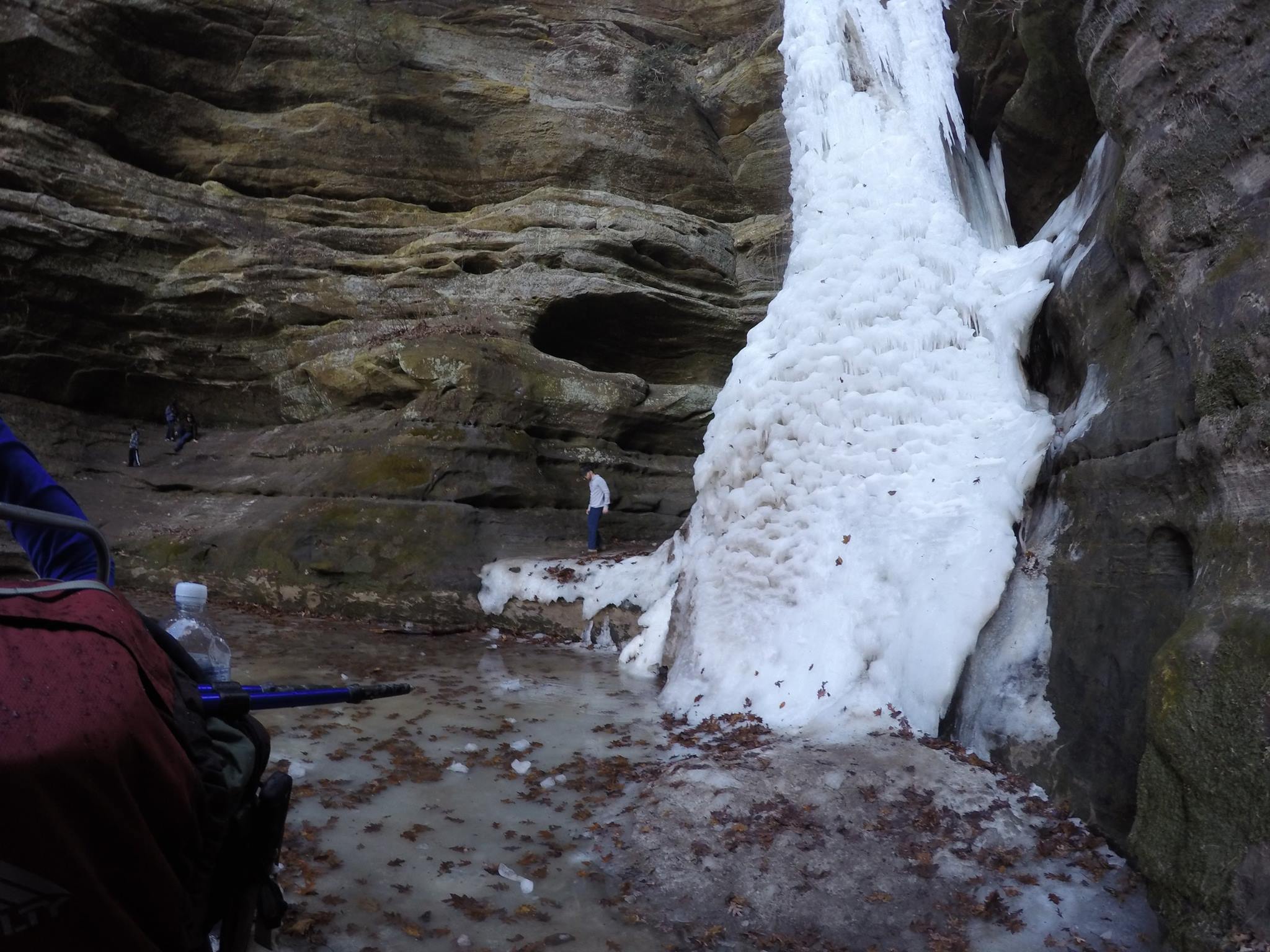 After making our way back through the mud, up more sets of devilish stairs that made me appreciate switchbacks and making it back to the truck, we finished out the day having hiked 8.5 trail miles according to my Fitbit Surge with just over 70 flights of stairs. So after this momentous feat we decided to end the journey with beer and nachos at a Duffy’s (fluffy’s) Pub right down the road. So after dropping Jarred and Cassie back at their place and reacquiring the hour that we lost on the way to Illinois we made it back to our homes at 1am and 2am respectively. This made for an incredibly long but immensely satisfying trip, and definitely one that I won’t soon forget.

Directions and further information are available in the link below.  https://www.alltrails.com/explore/trail/us/illinois/starved-rock-and-sandstone-point-overlook-trail

Our GPS trail and complete set of photos are linked below.

Our late February hike at Starved Rock in Illinois.