What is a thru-hike?

This is a question that a lot of new hikers find themselves asking or googling after hearing the term in conversation. But there isn’t always a straight answer, especially depending on what company you’re with at the time. Oftentimes people will refer to themselves as bona-fide thru hikers after completing one of America’s “Big Three” long trails, in one setting. Of course I’m referring to the iconic Appalachian Trail (2,200 miles), the scenic Pacific Crest Trail (2,659 miles) and the mystifying Continental Divide Trail (3,100 miles). If you ask someone who has hiked one of these trails what it takes to become a thru hiker, they will likely tell you that you have to hike the mileage of the trail that they hiked to earn the title, and rightly so.

But there are others in the sport that argue that completing any “long trail” in the United States will earn you the title. The truth is that it really depends on how you feel about it. Hike your own hike, if you complete a 100 mile trail in one setting and you want to call yourself a thru hiker, call yourself a thru hiker. As long as you feel comfortable with your accomplishments, that’s what the sport is all about. Getting to be one with nature, learning survival skills and bonding with new and old friends. You might not be a thru hiker to someone who has hikes one of the big three, but others who have hiked the trail you hiked might agree that you should call yourself a thru hiker. At the end of the day, it comes down to what you feel you are. If you feel like a section hiker, be a section hiker. If you feel like a thru hiker, be a thru hiker. Don’t base how you label yourself or your adventures on anyone’s views but your own. When it all comes to a close, you are the only person that lived your life and the only one who will remember how your adventures felt to you.

So whether you’re a day hiker, a section hiker, or a thru hiker. Enjoy the adventure and don’t stress over titles. Once you’ve gotten your trail name, you can revel in the fact that you’ve made it into a very prestigious group of people who care more for experiences than outward appearances and that is a very good place to be indeed.  Whatever you do, remember to hike your own hike (HYOH).

As far back as I can remember one of the things my father has always said is that he wants to thru-hike the Appalachian Trail in his lifetime. Most of the time when I was growing up this was a “someday” muse. Something he would say infrequently and I would say that I wanted to go with him, then conversation would change to something else. We always spent a lot of time outdoors when I was growing up, riding bikes, camping and exploring several acres of forest behind my grandparent’s house. The latter being a favorite past time of my siblings and I, every time there was a family get together or excuse to go to our grandparent’s, we were out in the woods. But sometime after graduating high school, while juggling a bills, work and responsibility I became a homebody. Even during my military service (aside from Afghanistan) when the day was over we were having get togethers at the house, watching movies or some other indoor activity. Even in Alaska, where there was so much to do in vast wilderness. I kick myself now for not hiking some of the awesome trails that I was within driving distance of for those years.

I didn’t really find my love for hiking until about a year ago. Just before the New Year, having struggled with increasing weight, alcoholism and marriage woes stemming from PTSD symptoms that I have been dealing with for years. Having been medicated by the VA to the point that I was numb to everything and basically going through my weekly routine like a zombie. I decided that 2016 would be a different year for me. I had gained so much weight that running was painfully hard on my knees and ankles, but walking was easy enough to manage. So after doing a few quick google searches about how to optimize calories burned while walking, I came across article after article about backpacking and hiking and just how many calories the sport burns.

Shortly after that I sent my father a cryptic “I think I’m going to start hiking this year so I can lose weight’ text. To which he replied that he would hike with me to help me lose weight and get healthy again. A few weeks later and after several hundreds of dollars’ worth of Amazon purchases to outfit myself, we picked a snowy Sunday the second week in January as our first hiking trip. We looked up local trails in the Morgan Monroe State Forest area, about a 40 minute drive from my house at the time. Once we decided to check out the “Low Gap Trail”, Dad drove up about an hour from where he lives and we set out in the fresh snow. After about an hour long 45mph drive on treacherous highways, and passing the trail twice (this picture is from a power line access ¾ of a mile down the road from the trailhead that we thought we were at) we set out. 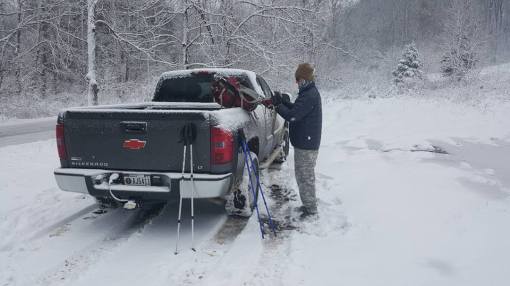 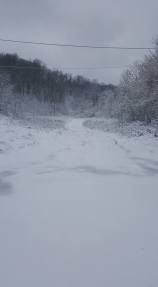 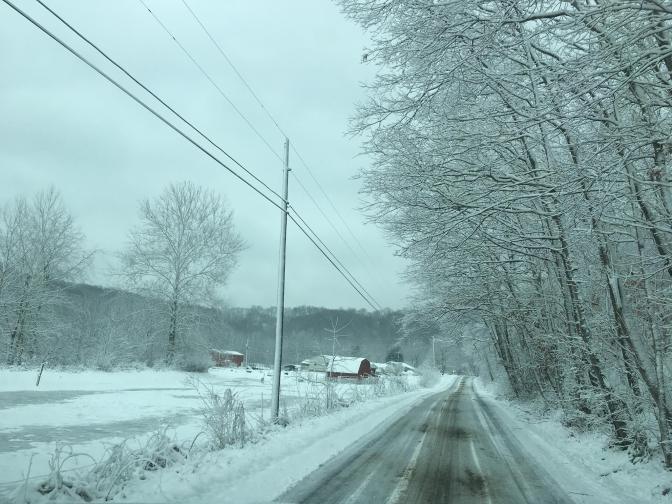 I threw a 40 pound pack, laden down with an enormous amount of crap that I never could have used on a day hike under any circumstance, on top of my 290lb frame (at the time). Now, if you’ve never hiked on a trail in fresh snow. Imagine trying to walk uphill at a 15/25 degree incline in the finest powdery sand that you can imagine, with an extra 40 pounds on your back. Needless to say I was questioning my life choices after about the first quarter mile. We stopped at the top of the second “big” hill that we encountered and I vividly remember standing there, in the middle of nowhere with my Dad, catching my breath and watching the snow continue to fall. I remember how peaceful it was in that forest, away from the sounds of the city and people complaining about the snow and the cold and everything else that we can think of to complain about. The only sound I heard was the soft patter of snowflakes bouncing off my hat and the calamitous thumping of my heartbeat in my ears. We continued on past newly fallen trees, over a creek bed and down a ravine. About a mile and a half into the 10 mile trail when we came across a camp site completely buried in snow. So we decided to drop our packs and get a fire going to warm up. My Dad was an Eagle Scout growing up and spent most of his adult life in the Army, I spent 4 years in Alaska, soaking up extreme cold weather and deep wilderness survival skills from field problems and mandatory trainings that you get living in a place as frigid and deadly as interior Alaska. But none of that mattered to the fire pit that day. We dug the pit down to the ash base, carved the ice covered bark from the twigs we found for kindling (it had rained for days before it froze and snow came) and found some dry leaves on some standing deadwood nearby. But after 30 minutes of trying everything, including torching everything with a propane cook stove, we still had no fire.

At this point we decided that the best way to war up would be to hike back to the truck the way we came. As we were backtracking, following our footsteps from 30 minutes earlier that were already filling in with new snow, I started to realize what I’ve been missing. Sweaty and out of breath despite temps in the low teens, lamenting myself for getting so out of shape and letting something like PTSD change so much of me I started to feel like this was exactly where I was supposed to be. Out on some crazy winter adventure with my Dad, bragging about how outdoorsy we are but failing to start a fire when we really could have used it. My first of many hike therapy sessions took place on that 1.5 mile stretch of the Low Gap Trail in the fresh Indiana snow. I didn’t know it at the time, but I was about to fall in love with the outdoors again and it would change my life in more ways than I could have ever imagined. 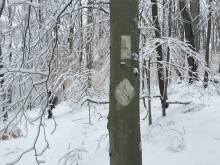